On holiday in Andalucía I was reading “mushroom at the end of the world” by Anna Tsing.

She enthusiastically describes an economy on what she calls ‘the ruins of capitalism’. Her fascination for the Matsutake mushroom lures her into the pine forest plantations of Oregon. Here she encounters a wide variety of communities picking the mushroom that is now almost extinct in Japan but therefore has become even more an object of value.

Her book is a result of almost ten years of field research and describes a complex and unconventional economy based on anthropocene natures and a post-capitalist motivation for trade: freedom. She unravels the relations between a wide variety of seemingly unconnected actors, showing ecologies and economies as one organism: the holobiont.

«Visiting the south of Spain, sensibilised by the texts of Tsing I felt a strange attraction to Gibraltar.»
Thijs de Zeeuw

Here, it seemed that in the stress of isolation, so near to Africa, with so many geo-political relicts, a similar complexity as Tsing describes, enrolled itself on this remarkable peninsula. Here too, a poignant ecological actor is present, the only European monkey: the Barbary macaque. And here too the non-human protagonist was there because of us, messing with ecologies. Like the mushroom, the macaque embodies a species that anticipates human action. And like the mushroom, the macaque flourishes on a substrate of multi-layered histories; on stories of war and love; on erroneous decisions and intuitive orders by world leaders.

According to the IUCN the Barbary Macaque is endangered (EN), after which it can only become critically endangered (CR) before it gets extinct. Their numbers are decreasing, the monkey is in serious trouble you could say. But looking at its distribution in European zoos the Barbary macaque is doing quite well. In most countries with a moderate or Mediterranean climate it is present and captive breeding is very successful. The group on the rock of Gibraltar is a sort of intermediate wild population. Here they live in relative freedom. Although a whole pack got culled when they interfered too much with daily British life, they mostly seem to know how to get the best from humans.

It illustrates the species’ political abilities. As it is found that within the species they form coalitions and solve conflicts, and that grooming turns out to be possibly more lucrative than being groomed, the species shows an interesting (inter)species social flexibility. They met Queen Elizabeth II, and it was said that Churchill himself has order for fresh blood in the population as he feared to loose the enclave when the monkeys would get extinct on Gibraltar.

And since the animals seem equally socially skilled as we are, the Guardian reports in 2014: “Thirty troublesome Gibraltar monkeys to be deported to Scottish safari park”. How humane is that!?

It is the combination of traits that makes that one identifies easily with the Barbary macaque. The macaque reminds us of our own human opportunism; an opportunism that we detest and are proud of at the same time. And therefore we like the macaque. You want to see him close but you never really trust him. He is just as good and bad as we are.

The semi-wild populations overlapping with our own habitat are therefore extremely interesting. Living together with the macaque is accepting we are nature ourselves. The Macaque shows us that the anthropocene comes with responsibility: becoming acquainted with the non-human. 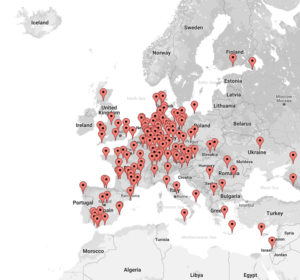 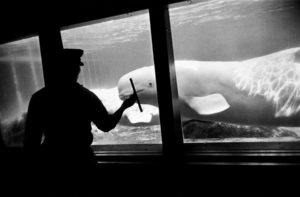