We Are Astronauts: You, me, and all the plants and animals
Edwin Gardner

The more I think about it, the more I think that the International Space Station functions as a temple of sorts, as a place of community, contemplation and worship. As a spiritual place that orbits our planet, where humans from various nations, ethnicities and creeds live together, work together, and earthgaze together. Looking down on 4 billion years of evolution, contemplating a place that spawned them all. Perhaps thinking that, from this distance, life can finally look at itself, appraise itself, fall in love with itself, through the eyes and minds of human consciousness. Or maybe that’s just me. But it is true that many astronauts experienced what has become known as The Overview Effect. A deep sense of connection with this immensely complex and wondrous living system that we call Earth, and an acute realization of how small and fragile it is against the overwhelming dark expanse.

Here, on our planet, something miraculous happened. Matter somehow transformed itself from unanimated substance into a variety of growing, sometimes breathing, and procreating and sometimes self-aware entities. Nobody knows exactly how this happened or how it works. How does a swirling pool of dead molecules become a festering soup of living microorganisms? It is a mystery science would love to solve, but so far there are no conclusive answers. In other words: If we were to destroy life on this planet – something that we are busy doing – there is no guarantee it would start over. It might be lost forever.

This is of course the conundrum of our time; we have the power and the momentum to destroy something that we barely understand but that we are completely part of and dependent upon. But because we Moderns have this strange worldview in which the natural world is separated from the human world, we are blind to this dependency. We are pulling the rug from beneath our own feet because we don’t see the connection between the two. And somehow we have to go to outer space to see it. To realize that we are all part of nature – that we are all, from small virus to massive elephant, from my gut bacteria to my brothers and sister, part of the same family tree – part of the same living and evolving system. Perhaps the real story we should tell ourselves is thus not our old ‘man versus nature’ narrative but rather a new ‘lets transform dead matter into living matter’ storyline.

I started to ponder these questions last week, when I had the flu. Life didn’t agree with me, or so I felt. I had quarantined myself into my apartment and decided to watch the Facing Gaia lecture series of Bruno Latour. In these lectures Latour explores how we, as a species, should face our new role within earth’s living system. Because we have become a force of nature ourselves, upsetting earth’s system, with potentially catastrophic consequences for mankind and for life at large, we should change our ways and believes in a way that fits our new position of power. Latour theorized about how a new political arena could be brought into being, one that would be sensitive to our new responsibilities. He even thought about who should be in this new political congress, or parliament, and under which entity, god or common set of beliefs and values they should gather.

According to Bruno Latour we need to assemble a political community under Gaia. The problem is however that Gaia is ephemeral. Because she is almost omnipresent, and because we are part of her, she’s too vast to comprehend or to sense as a singular entity. Looking at a globe is no solution for Latour. Latour sees the image of the earth, or the scale model of the globe, as a divisive illusion of control and objectification. Again putting earth and nature outside of us. So, inspired by Latour and thinking of The Overview Effect, I logically concluded that we needed a new ritual. A rite of passage that, when completed, made you eligible for citizenship of the planet earth. Basically I concluded that we needed to transform and expand the International Space Station into an orbital temple and open her up for once-in-a-lifetime pilgrimages. A Space Hajj.

You can only see the contours of something when you’re outside of that something. You can see molecules under an electron microscope, you can see galaxies through a telescope, and the viewpoint we need to see life is outer space. Only outside of Earth’s bosom one realizes that she is mother to us all.

Many of us know that we are part of something larger but this is superficial knowledge. It’s an abstraction. Not present in daily life. We need to experience this knowledge, so that it can become part of us, part of our memories. We need outer space, or at least its point of view, to recognize our responsibility towards life. As far as we know, we are the only living things in the universe. No signals from alien civilizations have been received, no life has been found on Mars, and we haven’t been able to scrape extraterrestrial fossils out of meteorites. This makes life as we know it infinitely valuable. Because if we destroy it, for all we know, it will be gone forever. Resulting in an epic waste of space (and time).

Let’s do one final leap of imagination.

Let’s assume for a moment that we are still here in the near future, that we haven’t destroyed the planet and that we are still as curious as we are today. And that somewhere in this imaginary future interplanetary travel will become as common as intercontinental travel is today. Not just a small cadre of pioneering astronauts will go up, but everybody will go up. Ordinary citizens but also presidents, popes, priests and mullah’s – all will regularly visit the Moon or go to Mars. For business, pleasure or both. More and more souls will witness our fragile blue oasis hanging in the vast black desert and from this fertile bed of sublime experiences Gaia will grow in the minds of mankind.

So let’s also assume that this development will happen simultaneous to us mastering the secrets of DNA. It is only recently that we have discovered that all life is written in the same language. It will thus only be a matter of time before we truly realize that the difference between humans and other life forms is just a matter of semantics. That we are, quite literary, all part of the same big family, strengthening our respect for life even further. Besides evolution’s slow but steady program of diversification, humanity will now be able to start coding its own life forms. Designing, editing, and adapting to flourish on other planets, moons and asteroids. Making it compatible with different atmospheres, soils and gravities. Perhaps making it so that it can even survive and thrive in space itself. Spreading life to the far corners of the solar system and beyond with the sole mission to thrive: To transform more and more dead matter into living matter.

But we don’t have to wait for this future to materialize. Just by imagining it we – or at least some of us – can already start rethinking the way we relate to life and our planet’s fragile ecosystems. Especially compared to our growing power over it. We will have to formulate a new body of ethical principles and guidelines that will build upon our humanism to create a sort of life-ism.

We need a new set of bioethics. And we should start by asking ourselves what life wants and what it deserves. I suspect that life want to spread. It wants to explore new worlds and new ways of being and experiencing. It wants to change and evolve and create and mutate and be able to travel to the stars. Seeding the universe with life gives previously dead matter the possibility to become aware and to experience. The spreading of life as a moral imperative will not only give us purpose, focus and gratification – it will save us from ourselves. 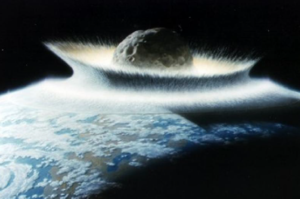